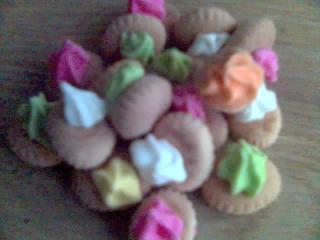 They’re basically biscuits with a dollop of coloured sugar on them. Green, pink, yellow, orange, white, you name it!

Some people bite off the biscuits first, then savour the sugar drops. Others don’t ever bother with the biscuits.

Me, I like to eat them whole! Pop ’em in and enjoy! Most (all?) of my friends have not been eating them since they were 10, but I buy them every other week! They are the ultimate Comfort Food, after chocolates of course.
How can enjoying a whole bag of them not lift your spirits?

Which was why I needed them so badly today. I dunno why, I had the extreme blues. Shucks, it was so bad, I didn’t want to go home after school’s annual Sports Day. So Yun and I went to Ling’s place instead.
(Oh and here I take the opportunity to thank the both of them, because going to Ling’s house was MY decision, and they really didn’t have to oblige!)

So we left for her house. All of us got comfy on her bed, with the air-conditioning on, and there were snacks, and the room dimly lit, and music in the background. Obviously, a gathering of friends with such an atmosphere, heart-to-heart talks are unavoidable!
‘Twas nice, especially since it has been months since the three of us had REAL heart-to-heart talks.

Unfortunately though, I was still in my House March uniform. I’m in the blue house, and this year our theme was the sky, and the girls dressed up as air stewardess while the guys donned blazers and berets. Flight captain, get it? The girls’ uniform were a torture! The knee-length skirts were tight! In fact, we couldn’t even sit on the ground properly! For a non-skirt person like me (I admit I’ve not worn an actual skirt since I was 6) it definitely was hell. But like what they say, beauty and comfort don’t go together. At least people thought our costumes were nice! Most said nicest, in fact. Uh-huh!

Ahh but I digress.

I had an extremely hard time sitting on Ling’s bed. The darned skirt! It was too short. But in the end, I couldn’t bother with it that much anymore. Hey they were all girls anyway!

Got home in the evening. Felt so much better. Who wouldn’t feel better after pillow talks?