My old one was waaaay too old, and I’d be embarrassed if anybody ever sees it. Lock it up and hide it away, I say.

New machines take a little while to get used to, ’cause me being me, I clog my desktop up with weird stuff and I’ve got more folders than everyone in the house combined. Now everything’s so totally empty.

It’s pretty cool, ’cause my dad got us a few extra stuff to go with it.

[I say ‘machine’ and I mean ‘computer’. Saying ‘my computer’ only makes me think of the little icon at the top left corner of your desktop.]

We went to this huge fabric shop, and we were walking around looking for good fabric for the cushions and curtains, when I recieved a message from Michelle.

Now, I’m the kind of person who’s blissfully living in denial, just that morning I was telling a totally stressed out friend not to worry ’cause SPM’s a long, long time away, and in my sad little mind, I still have a whole lot of time to while away and enjoy myself and not study/do homework.

The way I’ve been seeing it, the end of the year is still far, faaaaaar away.

That message was kind of like a slap to the face, like, ohmygoodness we are leaving soon.

And nothing would be a better indication to that than LKT’s very own Farewell party, for the seniors. (And then someone would interrupt and say, ‘NO, EX-seniors!’)

I was being a bit of a stupidhead, ’cause I whipped out my camera when the night was about to end, but OH SO FORTUNATELY, I managed to get some shots. 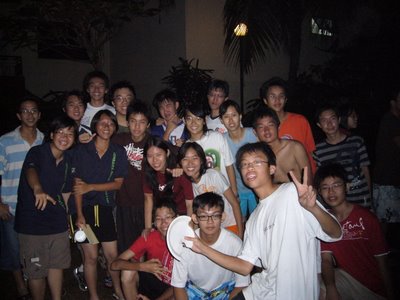 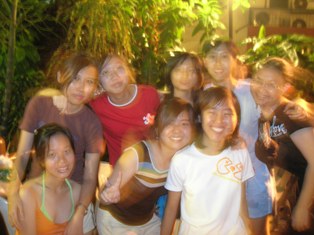 Group photo number two!
(I obviously stole this from Michelle’s blog. It’s stupid ’cause it’d be like I’m assuming people who read my blog, doesn’t read hers. And vice versa. But it’s such a nice photo!)

And because she’s my favourite junior… 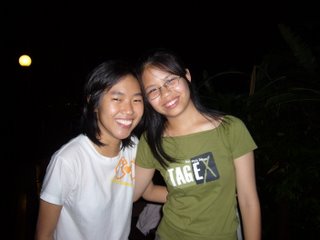 Hui Xian and I! 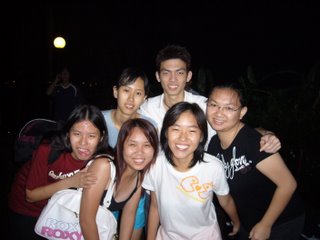 Ex-seniors. They had their BBQ farewell last year, and they’re still not letting go of LKT.

We were a little late to leave ’cause people were busy taking photos, and my parents got pretty pissed. My mom was even more unhappy when she realized I was sitting in the car, in my wet-ish clothes.

See, lately she’s been catching me with all the wrong things I’ve been doing, like being real quiet and letting her think I’m upstairs, studying, when in fact I’m upstairs, surfing the net.

She was even more unhappy when I told her I was skipping school on Monday. (For a pretty good reason okay.)

“Got important lessons on Monday?”

“Dun have lah. Moral, English, that kind of thing only.”

Which is complete cow dung, ’cause got Biology and Chemistry la.