Yeah, so this is the most recent revelation, that is both dissapointing and… well, it’s just plain dissappointing. And deppressing.

I, Chooiyen, am music illiterate, I am not “up-there” enough to appreciate classical music, and I suck at musical instruments.

And it doesn’t help that my own brother is one of the artsy-fartsiest person I’ve ever known.

I shall now proceed to publish my rare Full-Of-Photos Post, because a picture is worth a thousand words (or whatever it is they would say). In any case, at least it saves me from having to write a few thousand words (which I’m too lazy to write anyway).

So here they are, reasons why I am the music illiterate I am now. 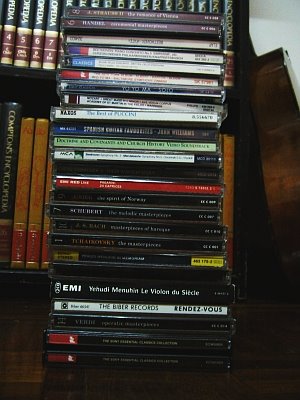 These, are the CDs of music that I never appreciated. They pretty much consist of chamber music, instrumental music, classical music, opera and a bunch of other stuff.

They aren’t the only ones though, because my brother asked for most of them to be sent to Hawaii, which my mom so obediently lovingly obliged.
(He’s studying Art Education in Hawaii, where he’s doing sculptures and paintings and all that artsy stuff.)

I used to think him weird, ’cause when he listens to his CDs, he’d get so into it that he’d swing his arms around, à la orchestra-conductor.

And, he’s the only person I know who can ever appreciate something like this… 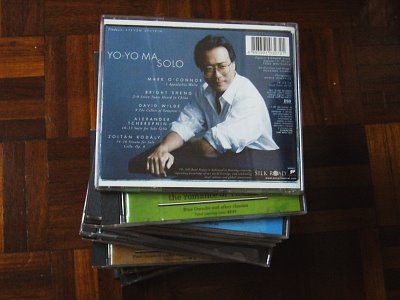 That’s cello music. My mom likened it to the background music for when some psycho in the movies is trying to torture a cat / innocent people / himself.

My brother knew the music and history of Bach and Dvorak by heart.

I, on the other hand, knew the lyrics to these by heart. 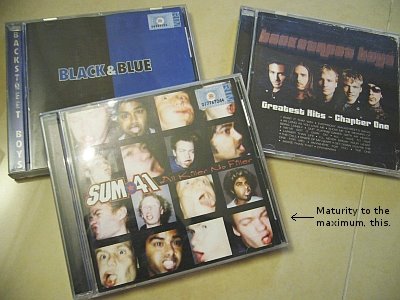 “Because you don’t know us at all,
we laugh when old people fall,
but what would you expect with a conscience so small?”

I feel so small now. 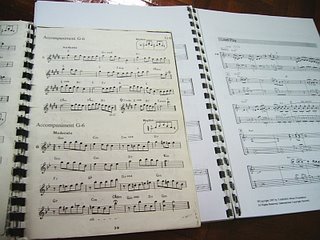 these, are the taugeh music words that I never learned to read.

The one on the left is my brother’s classical guitar exam pieces.
The one on the right is the book given to me by my first guitar instructer, which I happily discarded to the back of the closet when I switched teachers.

My second instructer, hahaha how can I put it, was funny. Both haha-funny and weird-funny.

He had HUGE fingers, they reminded me of sausages, with the ends slightly squared instead of round, which makes barring frets pretty easy for him. Heck, his one finger could have covered two whole frets (okay exaggerate just a bit), but his fingers were really THAT wide.

So me, being 15 and having skinny + short fingers, found barring pretty difficult.

It was irritating ’cause he’d always, always go, “Huh? Very hard meh? What’s so hard? Very hard meh??” and proceed to give me that I AM SO CONFUSED, WHY CAN YOU NOT PLAY PROPERLY, VERY HARD MEHHH kind of look.
(Haha, ChuanLing would be nodding her head if she was reading this.)

Anyway, it has been a long time since I last picked up the guitar.

Now I can only read tabs, not taugeh words. HOW SAD IS THAT.

Then, we have this.. 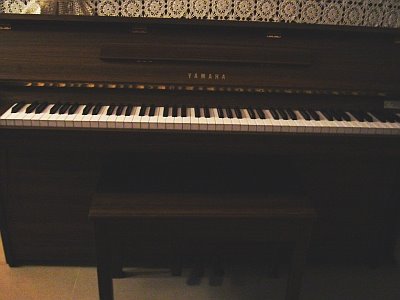 This, is the piano that I never learned how to play.

I don’t know of anybody who has lived with a piano in the house ever since she was young, and is not able to play it.

That was bought for my brother, by the way. See, it’s always him.

I so so so so so regret not taking lessons. How I wish I could play a proper song on it.

It is not very girly-like to not be able to play the piano, or any sort of keyboard instrument for that matter. I mean, more than three quarters of the girls I know can play a tune on it.

Don’t laugh okay, but I am kind of thinking of picking it up after The Exams.

Mostly because I read this on the net.

“We sit down to eat and (Sidney Corbett) starts telling me about his transition from a self-taught guitarist and music illiterate at age 17 to a PhD composition graduate from Yale at 25. Although he always doubted his musical abilities, he seemed to breeze through exams and was even awarded the Fulbright scholarship to go to the Hamburg University for Music.“

Weeell. Maybe I could make the transition too, hur hur hur! Anyhow. 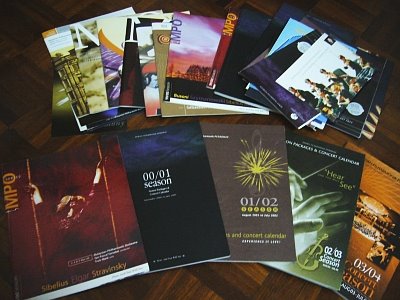 These, are the brochures from orchestras that I never learned to enjoy.

Yes, those were my brother’s. Told you he was the artsy one in the family. No one else I knew would pay to go to an orchestra. A rock concert, yes, but not an orchestra.

The earlist brochures thingie I found amongst the stack were a few from the 99/00 season. Which meant my brother started donning suits and ties and paying to go to the Malaysian Philharmonic Orchestra at the age of 15. And he goes pretty often too, hence the large stack of brochure thingies.

At 14, I was getting high during a Linkin Park concert.

At 16, I suffered from extreme humidity and being in close (CLOSE!) proximity to the other fellow concert-goers (touch here touch there, eww) during a Simple Plan show.

But I never went to an orchestra show before.

(Is the orchestra the band of musicians, or is that what the entire show is called? Or is it what the compositions are called? Is it it all of them?)

Now we have this. 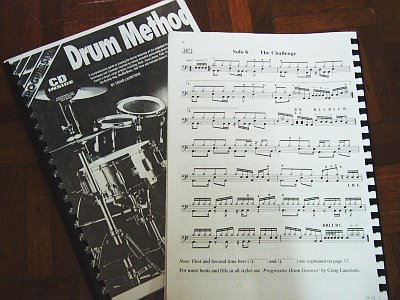 This, is the drum solo that I was never good enough to be able to play.

I was too lazy to stick around long enough to be able to play and wow people. I guess you could say, I was never the patient, ever-ready-to-learn student that I should’ve been.

Even during guitar lessons, my teacher would have me go home and practice on a piece.

I’d come back the next week, still screwing up parts that I shouldn’t be screwing up anymore.

“You got practice or not?”

But then again, I might have been more motivated to practice if only my AMPS weren’t so CACAT-ED. 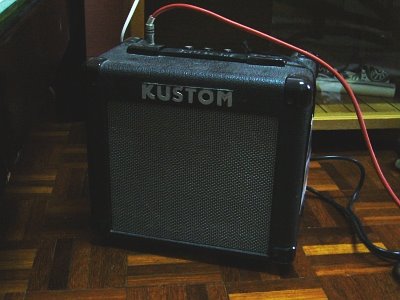 See that amplifier? See that red wire there?

It has a life of its own, and it is very prone to very random mood swings. It’s true I tell you.

Halfway through your playing, it will decide to give you the silent treatment, and nothing would come out of them speakers.

So you have to console it, sweet talk it, gently and soothingly move the wire around for a bit, before it finally relents and decide to talk to you again. Or sing out the tune you were playing on the guitar.

Back then Chuan Ling used to come over with her guitar so we could play together. Don’t think having guests meant the amp would behave itself
.

I remember us playing, and then my guitar going silent all of a sudden, and so one of us would go over to the amps, twist the red wire a bit, unplug it from the amps, then plug it in again, all in the efforts of trying to have it working again.

And when it finally worked, whoever using the electric guitar would try very very hard to not move it too much.

‘Cause moving it too much would mean untwisting the red wire from whatever random position it would decide only to work in, and then we would have to go through the whole rigmarole of “Twist again! No sound! Got sound already! Eh no sound again!”.

My brother, on the other hand, wanted to buy a classical guitar worth thousands of Ringgit, which my parents obediently lovingly obliged.

Back to why I am very un-intellectual-like. 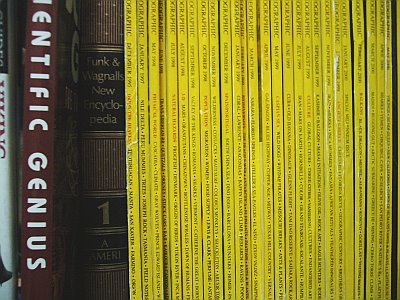 These, are the books that my brother read / magazines that he subscribed to.

The yellows ones on the right are very obviously National Geographic. What else would my artsy-fartsy brother subscribe to? Galaxie? Lime? CelebritySecretsRevealed?

He was only 11 when he asked to subscribe to National Geographic, which my parent obediently lovingly obliged to.

Me? I wanted to subscribe to Reader’s Digest last year, and my mom had to keep asking me, “You sure you want? You got read or not? Subscribe already don’t read, afterwards waste money. YOU SURE YOU WANT?”

YES I AM SURE. And yes we do have a subscription to Reader’s Digest.

While my brother was reading books like “Sceintific Genius” and encyclopedias (yes, he actually read the entire volume), I was reading this. 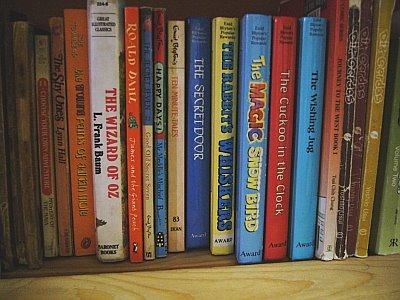 Yes I had better children’s books than these lot, otherwise I’d be pretty pathetic.

By the time my brother was 17, he had already read AND UNDERSTOOD “A Brief History Of Time”.

It is THE book ordinary people with ordinary intelligence and ordinary IQ like myself wouldn’t TRULY understand.

As for me, I’m 17, and just yesterday I was flipping through Roald Dahl’s “The BFG”.

Weeeell, I kind of found my hard cover copy of it, and hard covers are better than paperbacks, and it’s nicer to read too.

Plus, I needed a break from school textbooks (*disgusted look).

Proves just how intellectual I am. (NOT AT ALL.)

I want to dress in elegant gowns and play one of Beethoven’s greatest Symphonies on the grandest of grand pianos in front of an elite crowd of ‘high society’ people, and when I’m done everyone will cheer and clap in their elegant, high society way and I’ll move on to the most elite and the highest of the high society people and proceed to have the most intelligent conversation ever. We’ll discuss deep, meaningful topics like the Meaning Of Life and all that.

P.S. My use of “artsy-fartsy” is in a good way. Not the showy, pretentious kind of way!